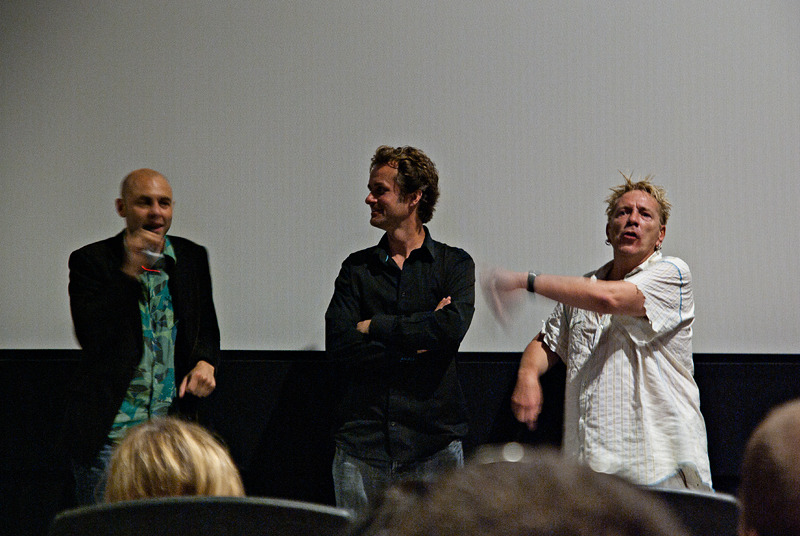 Johnny No Longer So Rotten

Posted by Damon Schreiber (Toronto, Canada) on 4 October 2011 in Lifestyle & Culture and Portfolio.

A couple weeks ago, I spent time attending some screenings at the Toronto International Film Festival, and now I will present for you a short recap. The films I saw are ones I chose, and thus my Festival experience was different from anyone else's. Still I believe that all the festival-goers are happy to spend a week immersed as much as they can handle in film.

From Up on Poppy Hill
Japanese animation from the son of Hayao Miyazaki. A charming coming of age story that takes place in early 1960s Yokohama. Well done, but slight compared to many other films from Studio Ghibli.

Sons of Norway
Another coming of age film, this time live action set in Norway in 1978. 14 year old Nikolas deals with a family tragedy by reinventing himself as a punk rocker inspired by the Sex Pistols. I really liked this one. I found it honest and unsentimental. Also very funny. Johnny (Rotten) Lydon makes a cameo appearance, and as executive producer, he was at the screening along with the Director Jens Lien and producer Christian Fredrik Martin.

Warriors of the Rainbow: Seediq Bale
A historical film, showing the rebellion of the native Seediq Bale against the occupying Japanese in the Wushe Incident that took place in central Taiwan in 1930. This film was generally well done and had some beautiful moments, though I found the battle in the second half went on way too long for my taste. Probably the highest death-per-minute ratio of any film I've ever seen. Having said that, it raised many questions for me about how history is told usually from the point of view of the victors. And where the hell is the epic film of the occupation of North America by the Europeans told from the point of view of the natives?

Countdown
A Korean thriller with some big (in Korea) stars. A brutal collection agent who can't remember how his son died suddenly needs a liver transplant, finds a sexy grifter to be the donor, and mayhem ensues. Like many star-heavy thrillers from anywhere, it was pretty uneven in tone and lacked a solid script. It couldn't quite decide if it wanted to be a thriller, a romance, or a family drama, so it tried to be all three.

The Invader
A visually provocative Belgian film about an African refugee adrift in Belgium - a man who can't quite understand that his place in European society is to work like a dog and stay out of everyone else's way. Essentially a character study with a laconic plot, this was a haunting, thought-provoking film, and actor Isaka Sawadogo was brilliant.

Cut
A celebration of and lament for cinema as art: Cut is the story of a frustrated filmmaker who pays off his staggering debt to the mob by volunteering to be punched at $50 a pop. Interestingly this was shot in Japan with Japanese actors (including the wonderful Hidetoshi Nishijima) but written and directed by the Iranian-American Amir Naderi. Brutal, but rewarding especially if you revere cinema. A very personal film.

Faust
The final film (of four) in Sokurov's Men of Power series. A quirky grimy portrait of early 1800s Germany with stream-of-consciousness philosophical dialogs, characters who cannot help but get in each other's way and stumble over each other at all times, and a grotesque devil who appears to have stepped out of a Hieronymous Bosch painting. Magnificent if you're in the right frame of mind.

I Wish
A final coming-of-age story, this one about two brothers who together try to reconcile the fact of their parents' divorce and the breakup of their family. One brother has chosen to live with their father, and the other one with their mother. Not nearly as heavy (at least on the surface) as my description might imply, this is a truly beautiful and honest work about learning to meet things halfway.

Oslo August 31
A downer for the closer, but another supremely honest work, this film chronicles a day in the life of a young man who had battled addiction, been through treatment, and finds at the end that he can't seem to recognize himself as more than an empty shell. Intelligent but hopeless, he both reaches out to people and pushes them away on what he intends to be his last day alive. Sad but beautiful, and more than most films with depressed characters, respectful of that character as well as the audience.