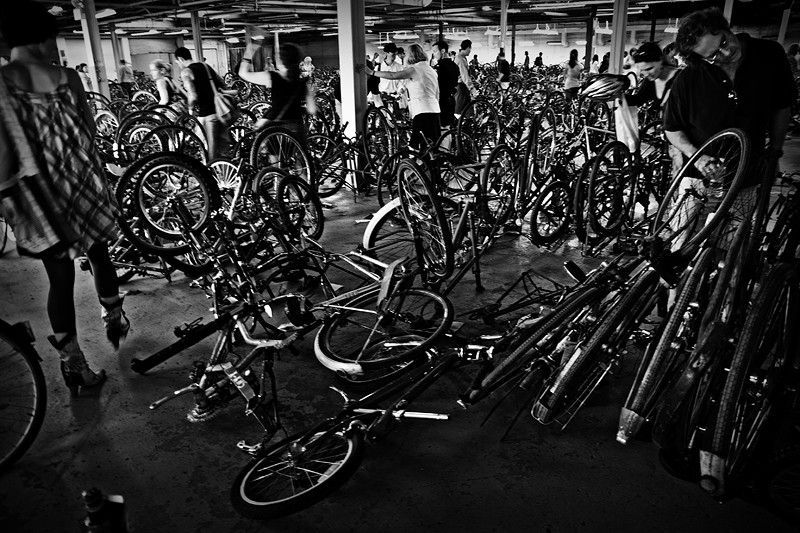 Posted by Damon Schreiber (Toronto, Canada) on 14 August 2008 in Transportation and Portfolio.

On July 16th, Toronto saw the the arrest of the biggest 'alleged' bike theft ring ever. One man, Igor Kenk, who was well known among cyclists in the city for his large and crappy bike store was arrested after police witnessed him instructing an associate to steal a nearby bike.

In the days after his arrest, police discovered nearly 3000 bicycles stored around the city in various garages rented by Mr. Kenk. It's easy to assume that most of these are stolen. I believe it myself. And it was widely assumed that nearly every bike in his store was hot.

Here's a nice article about the story.

It was a lot of work for the police to tag and catalogue all these bikes, so they decided to put them on display for the public. And anyone who had a receipt or a photo could reclaim a stolen bike. I went partly to look for a bike (a gold Concorde mountain bike - have you seen it?) that was stolen in 1995, and partly to take photos.

I didn't find my bike, but I'm glad I went if only to take in the sheer number of bicycles in person. There were two warehouses full of bikes of all ages, price ranges and conditions, but they all represented the heartbreak that one feels when comes to the place where one's bike was supposed to be.

So anyway, here's a short series of photos from the police showing. At one point I was told not to take photos, but well, you know...

Thanks for sharing this story! This guy would fear for his life if he had stolen my bike. Reading about arresting him is as satisfying as seeing spammers going into jail. Very cool shot!

now that is a sting - what an arse - selling hot bikes in a bike store... makes for a fun photo though :)

How bizarre! What a story... what a shot!

Great movement. I love the outfit of the lady in the left! Superb!

Great story and photo too!

Terrific. A morning's reading. Great shot too, even though it was a sneaky one.

The lady to the left is great in this shot. What a great shot overall...a mass of confusion!