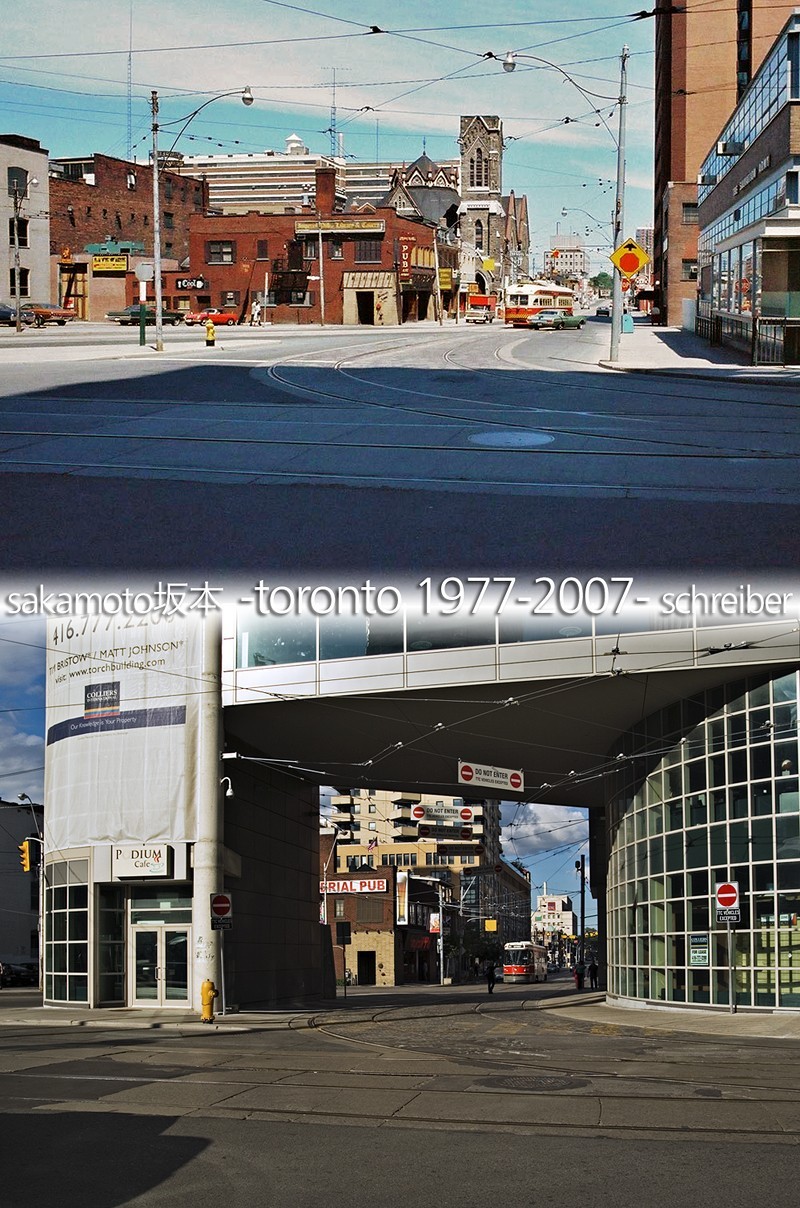 Posted by Damon Schreiber (Toronto, Canada) on 9 August 2007 in Cityscape & Urban and Portfolio.

___________
Non-series-related: Jason has passed on the message that an Am3 member called Soph is organising an impromptu theme this Friday. You just have to photograph somthing with "I love you" in the language of your choice and post it on Friday. I'll interrupt this series just for that day, and I encourage all of you to participate. Her page is here.
___________

I'll not post any more general writing about general technique today. Instead, I'll just speak a little about this particular image. It wouldn't be hard to say this about most of them, but this one was tricky. First, as you can see, a few years ago a building was constructed that would have completely blocked the view, except that space was left for the streetcar to pass - what luck! (Three years ago this was one of those places that was under construction.) And there are still common elements from thirty years ago: the tracks, the building on the far left, the Imperial Pub, and the factory in the far distance.

But there are many red herrings as well. The first thing that confused me was that sidewalk straight ahead on the other side of the tracks. It was only after bumping my head on the wall and many revisits than I noticed how much closer to the tracks the new sidewalk lies compared to the old one. The tracks are the same, but another point of mis-alignment was the manhole cover which has been moved a metre or so to the left of where it was 30 years ago (probably just to frustrate historical photographers).

My perspective in this photo isn't completely exact, but I deem it close enough for rock and roll. For the truly ambitious, I recommend taking a laptop computer on site with you in order to perform immediate comparisons and adjustments. Probably would have saved me lots of time, but I didn't think of it till lately and anyway, I don't have one. Also, it would add significantly to the cumbersomeness of the venture.

wow! it changed to much!! Are you in a nostalgic period? Thank you for the message for tomorrow!!

I'll bet that Pub is gone in another 30 years! Great work!

The picture reminds me of the" Forestal building" that I saw in Washington DC. The road goes through it . please have a look at the site below.
http://wallpaper.jpn.org/jpg.image/scenery.img/sn-wash27-1024.jpg
Anyway,It seems that the sidewalk is too narrow and too close to the tracks for pedestrians to pass safely .

The "factory" in the distance was the shipping warehouse for Sears Canada. It is now renovated into a massive loft complex known as The Merchandise Building.