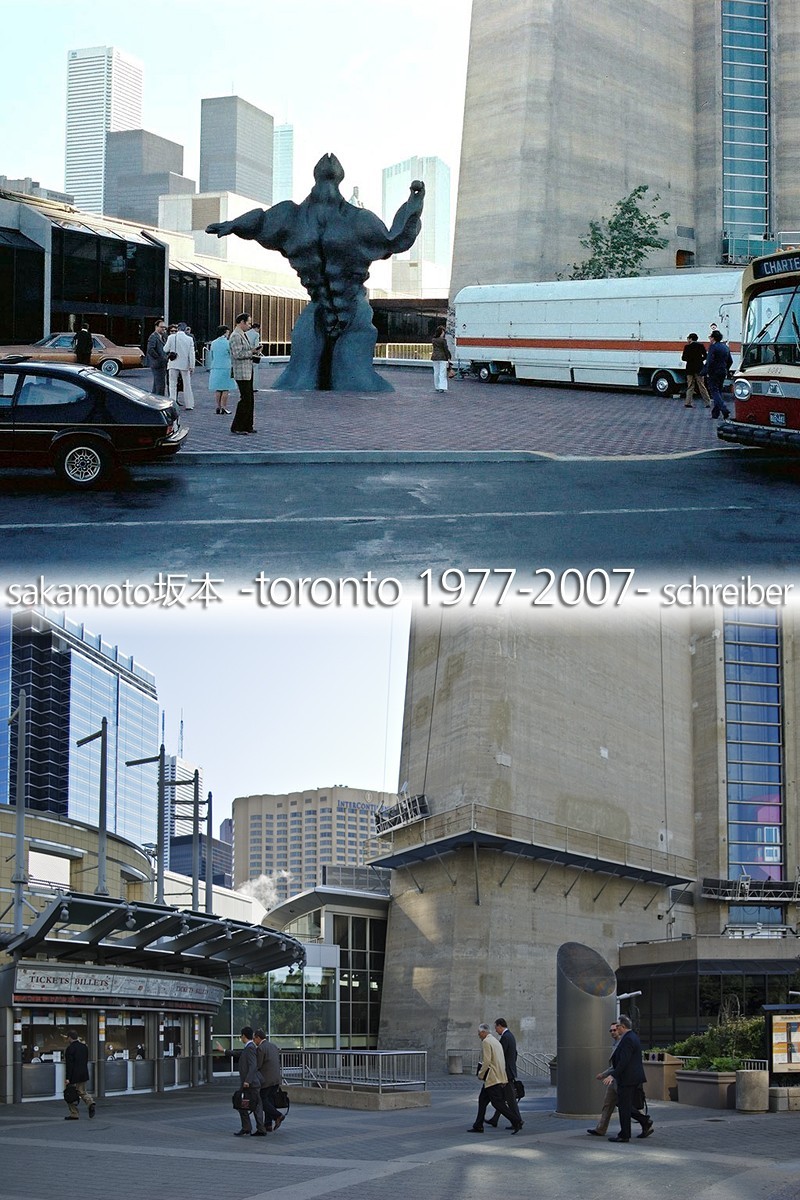 The base of the CN Tower

Posted by Damon Schreiber (Toronto, Canada) on 2 August 2007 in Cityscape & Urban and Portfolio.

This spring, I bought a new camera - that Pentax K10D that I'd read so much about, and with it a 17-70mm lens that would give me a 25-105mm equivalent angle of view in 35mm terms (Technical point: like many DSLR cameras, the Pentax uses a 1.5 crop APS-C sensor. That means that it's smaller than a frame of 35mm film to the degree that any given lens focal length (e.g. 19mm) would be multiplied by 1.5 to get the equivalent length if it had been used on a 35mm camera. Thus, that 19mm lens used on an APS-C camera will give you an image roughly identical in terms of field of view to that of a 28mm lens used on a 35mm camera.)

I had guessed that since the original photos were apparently wider than if they had been taken using a 35mm lens, but they weren't fish-eye photos by any means, they were probably taken using a 28mm lens - that being the most common wide angle focal length used during the 1970s. Luckily zoom lenses weren't nearly as common then as now so the focal length seemed consistent at least.

Note: I forgot the watermark on this one. I'll add it when I get a chance. So much has changed here. The CN tower (undoubtedly the defining feature of Toronto's skyline) was newly built in 1977. Cheap people like me sometimes go to the base and look up rather than paying the ridiculous fee to actually get to the top. But the view is fantastic. You'll note that the angle of view isn't quite the same in the two photos. I probably would have been able to improve it if I'd gone back a few times, but it's kind of out of the way for me compared to the other downtown locations, so I decided that this one is 'good enough'. Too much perfectionism can doom a project.

One thing obviously missing in the modern photo is the real star of the 1977 version: the statue. When I saw the original photo I thought it rang a bell and I wasn't sure if it was from memories of visiting the base of the tower in the past. But it turns out I often pass it on my way to work. Since 1994, the statue Universal Man (which was originally commissioned for CN by the artist Gerald Gladstone) has been situated in the parking lot of the Yorkdale Mall. Here's a recent picture I took. I feel kind of sad seeing it there so out of place in that shopper's mecca. In front of the CN tower, it seemed to show a kind of yearning for knowledge and greatness, giving meaning to its name. In front of the shopping centre, it just looks grotesque and filled with desparate rage, like Goya's Saturn.

Another fascinating addition to this series, Damon. Still get the Rockford Files feeling from the vehicles here, and feel sad for the statue. I checked your post of the statue's new location and was dumb-struck and over-awed at the harmony struck by it's new surroundings. It's clearly regarded as a HUGE cultural and social icon by those in the upper echelons of the vaulted worlds of town-planning. I feel the irony can't have been missed by the bureaucrats who authorised it: Universal Man in a shopper's mecca parking lot....it's quite a demotion, and what we're all supposed to aspire to. Damn my cynicism!

@Stu: Thanks, Stu! Heh, I'm glad I'm not alone. While researching, I came across this quote on the Internet on a travelogue written by a tourist from Iowa, USA: 'in the middle of the Yorkdale parking lot there is a hideous lump of bronze entitled "Universal Man". It does a good job of filling space in a parking lot, but not much more than that.' Poor thing; perhaps some day it can retire to a home for unwanted statues.

The bureaucrats goof it up again! What a shame to move Universal Man to the parking lot. Great documentation!

It seems to me that there is something lacking in the open space in front of the tower base without that remarkable statue.

That open space without the statue is lacking character, so sad that they decided to relocate the statue to that parking lot, there it is totally out of context. Probably they thought that it was a good idea to replace the statue for what seems to be ventilation for a underground level or parking space, maybe they felt that this was going to be a new icon for the place, simple, minimalist. That staircase seems out of place too and they ruined the facade trying to make repairs on selective spots. Nice shot Damon!

That statue has had a hard time. When the powers that be at the CN Tower decided they didn't like it any more, they unceremoniously dumped it underneath a highway overpass. It was likely meant to be a very brief stay until another spot was found for it, but I think it was there for quite some time. One day who should drive by than Gerry Gladstone himself, who almost had a stroke right then! He got home and spent the next while making outraged phone calls. Eventually it was picked up by North York and taken to its present, rather sad location.