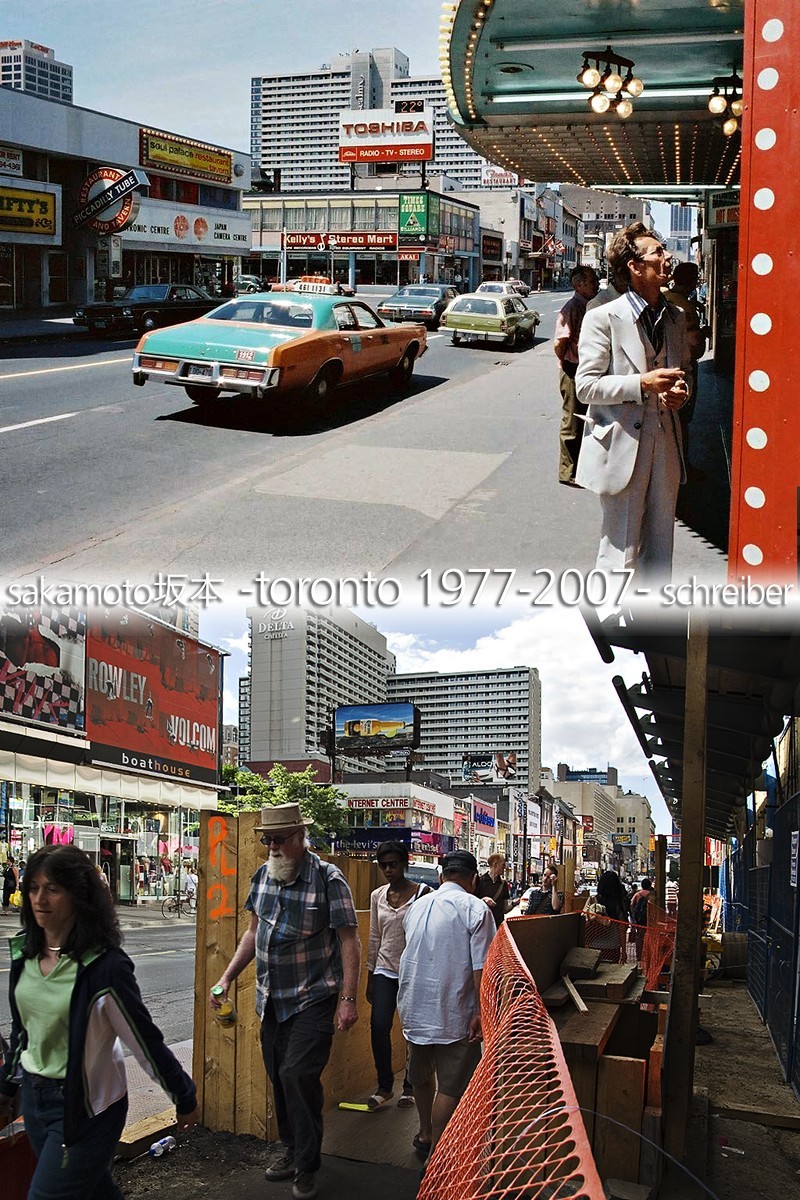 Posted by Damon Schreiber (Toronto, Canada) on 1 August 2007 in Cityscape & Urban and Portfolio.

But I went out and took some photos - I sent some to Sakamoto-san too, but over time I grew frustrated with the project for a number of reasons. First, I noticed that the lens on my Canon G3 wasn't quite wide enough to capture the viewpoint in the original images. My original idea of capturing the same scenes devolved into a perfectionist obsession with duplicating the exact angles and perspectives. My camera just wasn't really up to it with its 35mm (equiv.) lens. Also, there was a tremendous amount of construction going on in Toronto that year - and most of the sites seemed to be in the exact places I wanted to photograph. I know it's part of city life, but when a whole series is devoted to construction sites, you get a warped view of that city.

So I put it off. Every once in awhile, I'd go out and take a few more, but my heart wasn't really in it the way it was at first. Then something bad happened... I lost touch with Sakamoto-san. My bookmark just gave me a Page Not Found 404 error. His email address no longer worked. This was a pity, although I had saved many of his photos onto my hard drive.

Note: This was a bit harder to find location-wise than some. But a few buildings are recognisable. Here's an example of construction that never seems to end these days - interestingly, they're building a movie theatre. It's just down the street from Sam the Record Man. In the original photo, note the Trudeau-era fashion. Also note that what was a 'Stereo Mart' is now an 'Internet Centre'. That seems about right.

the clothes tell the story here.. and youre right about that internet centre.. it does seem appropriate.

... and the guy in the snappy Trudeau-era suit has retired, grown a beard, and aged considerably.

@JS: Would be a wonderful bit of fun if it turned out to be the same guy. Dare to dream.

Amazing. I'd never guess it was the same place. Love the dude in the top photo!

another interesting then and now shot...looks like the theater is now gone...

This is such an ingenious series, Damon. Not been doing the rounds for a while but catching up now, and am enthralled by this idea of yours. I feel like I'm in an episode of the Rockford Files when I see the cars in the 70's photos. Things seem so different but then....not so different as well. I'm sorely tempted to do a similar thing for Kyoto but the sheer plagiarism of the idea might spoil it.
Anyway, this is fascinating stuff mate and looking fwd to the rest.

By the way, you said he had also been to Scotland.......I'd be interested to see those pics so if you could send me a link I'd really appreciate it.

@Stu: Thanks, Stu! As to plagiarism, I say have at it, mate! But wait until I get to the part about what's involved technically in trying to get the same angles and viewpoints... Lots more to come.

So many changes over the year, in this particular shot I can say that I miss the entrance of the old theater! =)

Only I can say is that the building behind the signboard of Toshiba is a hotel where I stayed for a week.
Hotel's name was CHELSEA INN.

@Shige Sakamoto: Yes, and the hotel is still there (I even stayed there myself one night 15 years ago). It looks the same from the front. But as you can see in this photo, they built a new wing to the original building. Cheers!

Kelly's Stereo Mart - where I bought my 4th Reel-to-Reel tape player (AKAI) late '70s - still have and use it.